The 2018 National Survey of Science and Mathematics Education was just released to the public. With all the fancy statistical talk and confusing methodology, it is the same old story; our science & math teachers are ill-prepared.

Here's my take on this study as well as my take on my 41 years as a Math, Physics, & Astronomy teacher. MOST high school science teachers are simply not trained, certified, and/or qualified to teach their subject matter. Period. There are several exceptions, like Greenwich HS (CT) physics department in the early 2000's. There were five of us and I felt the LEAST qualified even though I was nationally recognized as a "good" one. However, by the time I left in 2016, there were a couple "newbies" who I felt were lacking quality. Just me.

In my 41 years I witnessed MANY totally unqualified science/math teachers. Teaching kids things like [ACTUAL QUOTES]:


"Cold air rises. That is why it is colder at the tops of high mountains."
"I'm still not convinced dinosaurs existed." (Direct quote to me from a 6th grade teacher who preferred to believe the Bible literally...)
"If this stuff is confusing to you, don't worry. I don't believe it either, remember it is only a theory." (A quote by a BIO teacher during a lesson on evolution! Witnessed directly during a Middle-States Eval visit in NJ)
"If the so-called Big Bang actually happened, why hasn't anyone heard it?" (Astronomy teacher-colleague during a lunch room Q&A. I barfed...)

As you can see, Elementary Sci teaching is almost non-existent. Only 3% of ElemSci teachers have a science degree of any sort. That number increases to 42% for MiddleSci. THAT means that MORE THAN HALF of your Middle School science teachers do NOT have a degree in science. Now, you'd think that this is rectified by the time we get to high school, right? Nope. 79% of high school Sci teachers have a degree in a science. This means that one out of five high school science teachers are teaching without a content degree!

NOTE that I do not include "Science Education" as a science degree. Sci Ed is a degree that is designed to teach a teacher HOW to teach science, NOT what science is. It is not a science CONTENT degree.

Math & CompSci are in worse shape than even the Sci! 1% Elem Math, 26% Middle Math, & 55% HS Math! That means that three out of five Middle School Math teachers have NO DEGREE in Math! About HALF of the HS Math folks have NO DEGREE IN MATH! WTF? CompSci? Forget about it!

My takeaway? Many folks I've talked to through the years wonder why we high school / college teachers can't get these kids to learn science so we can rank among the top countries of the world instead of 28th (We beat Lebanon, Sri Lanka, and France!) according to the last TIMSS report. It's simple, actually. Since a vast majority of the students coming into high school have been taught science by NON-SCIENCE educated folk, they come in with serious misconceptions and huge black hole sized gaps in their science content. One thing I'm sure of is that it is so much easier to teach a topic than it is to UN-teach a topic. If a student has a firm deep-seated "belief" that heavier objects fall faster than lighter objects, it requires magic tricks to convince them otherwise. Further, even AFTER I'm convinced they no longer believe the bad thing, they will eventually circle back to it and ignore everything I did... sigh...

Now, for the sad part. The above Table 2.6 shows a lack of "science" and "math" degrees among the science & math folks. Take a gander at the next table up for grabs on our show, Table 2.15. 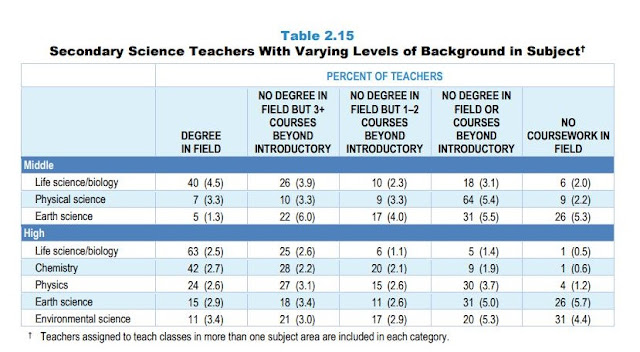 Wow. Just, wow... Synopsis so you don't have to crunch any numbers: A. HS Teachers WITH A DEGREE IN THE FIELD THEY TEACH: 63% for Bio, 42% for Chem, 24% for Physics, 15% for Earth, & 11% for EnviroSci. If this doesn't make your sphincter pucker up, nothing will. I'm not getting into the Middle School numbers because my sphincter hasn't loosened up since I saw that! What does this mean for high school students?

So, next time you wonder why little Jimmy isn't getting a full scholarship to Drexel Engineering University, reflect on the fact that only about 1/3 of ALL high school teachers even have a degree in the field they are teaching! Think of it this way, how effective would you learn investing strategies from your auto mechanic? How qualified is your beautician in building your new dream home? Would you trust your dentist, as educated as he/she/it may be, to rebuild the transmission on your beloved original Bumblebee 1969 Chevy Camaro SS350 convertible? 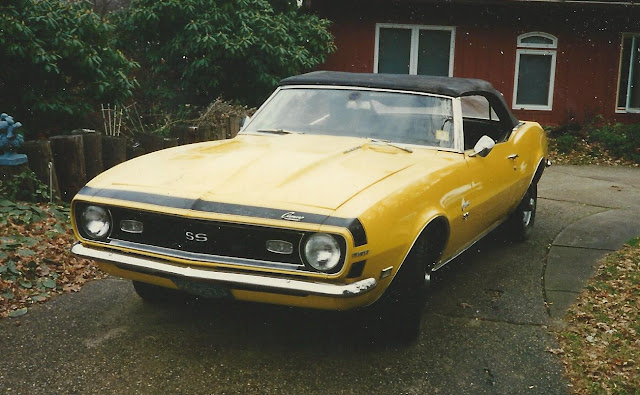 Posted by HalfAstro Dr. Daryl Taylor at 9:01 AM