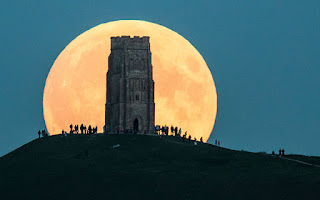 Morning, Kids. There's another "Super Moon" coming next week. Prepare yourselves for the onslaught of misinformation and utter stupidity about this relatively common occurrence.

No, it won't cause the Earth to shift in orbit and kill us all Hollywood-style.

No, it doesn't signal the end of mankind as we know it; the current presidential election is doing that just fine, thank you...

No, these are not that rare; we have six of these in 2016. We had Super Moons in March, April, and May. Now, we have them in October, November, and December.

Sunday and Monday (10/13 & 10/14) will be, if the darn weather cooperates, an unusually bright full moon referred to as a "Super Moon." Coincidentally, this November full moon is called the "Beaver Moon" since it was time to set the beaver traps before the swamps and lakes froze over. So, why "Super?" This is because the Moon is not only at perigee, point of closest approach in its orbit around Earth, but this perigee coincides with the timing of a full Moon. This Perigee hasn't occurred within an hour of full Moon since 1948; the last time Cleveland Indians won the World Series! Also, the next time for this Super-Duper-Moon is 2034; the next time the Indians win the World Series...

So, just what makes a Moon "Super" and/or this "Super-Duper" one? Take a look at the following image of our Moon orbit. 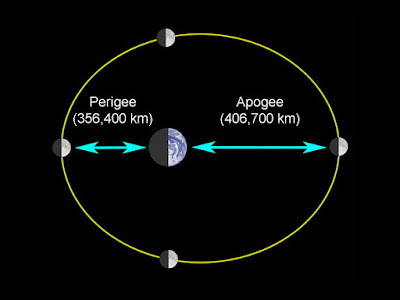 Notice the Moon orbits earth in an elliptical orbit, NOT a circular one. This means our Moon is closer sometimes and further away sometimes. When it is the closest, we call it "at perihelion"; Perigee on above image. Conversely, when it is furthest away, it is "at Aphelion"; Apogee. A "Super Moon" is nothing more than a full moon that happens to occur at Perigee when the Moon is closest to us. This gives the full moon a slightly bigger appearance, by about 14% bigger, and brighter look, by about 30%, than a typical full moon. 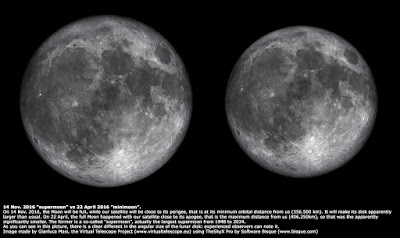 So head on out Sunday, Monday or even Tuesday after sunset. You can't miss unless you are under thick clouds. this Super-Duper-Moon. It rises right at local sunset and lasts through the entire night. 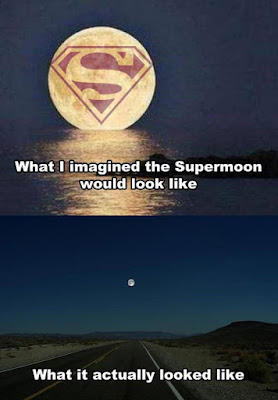 Posted by HalfAstro Dr. Daryl Taylor at 3:09 AM