I've been busy running a few online things about ISON, including a TV appearance on WTNH Ch8 show called CT Style, and have neglected my own blog... A few online updates at WXEdge.com:

4. My TV appearance on CT Style show chatting about ISON. Here's a few updates on ISON! It's looking GOOD! 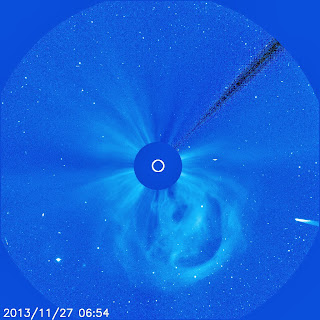 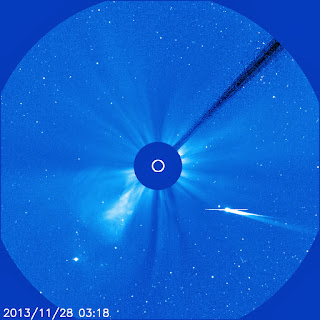 Both above images compliments of NASA's SOHO.

In the last few days, NASA and the proverbial ton of amateur astronomers have been keeping their collective eyes on ISON as it makes its “death” plunge toward the Sun. The above images are stills from a sequence of 97 shots taken by NASA’s SOHO (Solar and Heliospheric Observatory) yesterday and today (Wed & Thurs). Note a few things:

1. ISON brightens drastically overnight! This is great news! It means the Sun is blowing off gases by sublimating ice and not just making ISON fall apart by shedding dirt and rocks. The indication here is that ISON is still intact and MAY make it all the way. He says with fingers crossed…
2. ISON’s double tail is evident! The brighter “upper” tail is dirt & dust falling off after the ice holding it in place is gone. The longer fainter tail is the ion tail caused by solar winds (high energy protons & electrons) smacking into the gases surrounding the comet, knocking electrons off these atoms, then as the electrons scramble to reform with these now positively charged gas molecules, they emit light by dropping back to their ground state.
3. In both images, solar CME’s are evident. In the first image, you can clearly see a Coronal Mass Ejection expanding downward. In the 2nd image, one is seen heading toward the seven o’clock position. Had one of these smacked ISON directly, it may have spelled an early doom. 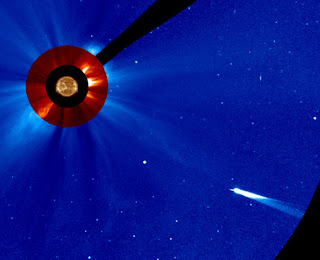 This image is a composite of three observatories.

According to Dr. Phil Plait at BadAstronomy.com (personal friend and hero):

The picture above is a combination of three different views from space-based solar observatories taken at 16:45 UTC (11:45 EST) today [Wednesday 11/27/2013]. I’ll explain, but the important thing to note is that ISON looks intact, despite earlier worries, and is poised to put on quite a show. In the picture, the inner (orangish) circle is the disk of the Sun seen by the Solar Dynamics Observatory, observed in the far ultraviolet. It’s there to give you a sense of scale; mind you, the Sun is about 1.4 million km (860,000 miles) across. The red ring is from the NASA/ESA Solar and Heliospheric Observatory, or SOHO, showing the space directly around the Sun. The streamers are from the solar wind, subatomic particles flung out by the Sun’s fierce magnetic field. The blue is also from SOHO, but shows a much larger area around the Sun (the black line to the upper right is an arm that holds a disk of metal used to block out the direct light from the Sun, allowing fainter objects to be seen). 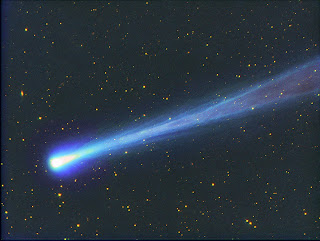 Want to watch ISON live today as it makes the perihelion trip? NASA is running a live Google+ hangout with real honest-ta-goodness scientists and live telescope views from around the world and space. Again, according to Phil Plait:

But you can watch the whole thing live, with me, and a pile of NASA scientists on Google+! NASA is holding a live video Hangout on G+ during ISON’s perihelion passage (peri = close, helion = Sun, so perihelion is the closest point in an object’s orbit to the Sun). The event is from 18:00 – 20:30 UTC (1:00 – 3:30 p.m. EST). There will be live feed from NASA’s SOHO Sun-observing satellite (that should be spectacular) and from the Kitt Peak Observatory solar telescope. Guests include astronomers C. Alex Young, W. Dean Pesnell, Karl Battams (who runs theSunGrazingComets feed on Twitter), and me! I’ll be on from 1:30 – 2:30 EST to talk about the comet, the Sun, and what we’ll be seeing on the screen. We’ll also be answering questions live from Twitter; ask away using the hashtags#ISON and #askNASA.

Posted by HalfAstro Dr. Daryl Taylor at 3:40 AM