The Power/Energy of Sandy 2012

Following is an expanded version of an article my Fizzix kids and I wrote for WTNH's science website at WXEdge.com . It deals with the power ratings of a typical hurricane as Hurricane Sandy barrelled down upon us here in CT. The original was written Friday, 10/26/2012. 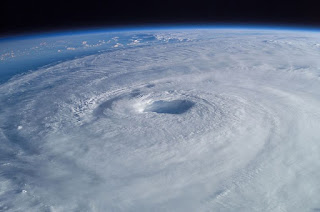 Hurricanes. Just the word sends shivers down the spines of us New Englanders. We don't see that many come our way, but when they do, our homes and infrastructures, built to withstand the harsh New England winters, don't fair well. We all remember what Irene did to CT about this time last year and the bizarre Snowmageddon, that dumped a foot of snow on our still live trees and caused state-wide power outages for over a week, exactly 12 months ago this week. Well, we are in for another round this week.

An article from Weather Magazine (Yes, there is such a thing…), Emanuel, K. A., (1999): "The power of a hurricane: An example of reckless driving on the information superhighway" Weather, 54, 107-108, pinpointed a mathematical explanation of the energy generated by a moderate (CAT2) hurricane. Without boring you with the triple partial integral equations, which quite frankly we don't understand either, here is a summary of the numbers. A typical hurricane (Cat2) will produce 6 x 1014 Watts of power. That is roughly half a million “average” nuclear bombs. Yeah, that's a lot of power. That is, in fact, 200 times the power that the entire planet generates in electricity.

What makes hurricanes one of the most powerful and destructive forces in nature and just where does all that power actually come from? Aside from the obvious wind that could uproot windmills on any wind farm around, it's simple thermodynamics. Yes, there's a word that sends shivers up the spines of high school science students everywhere. You may recall from high school chemistry or physics that one kilogram (just over 2 pounds) of water requires 2.3 MILLION Joules of energy to either turn from a liquid to a gas (vaporization) or turn from a gas to a liquid (condensation). As cooler air rushes in to takes the place of the warmer air at the center of a tropical depression created over warm ocean water, water vapor in the cooler air condenses. This releases energy; 2.3 MILLION Joules per kilogram of vapor. Now, you have the typical self-fulfilling prophecy. This released energy warms the surrounding air, creating a larger more severe depression, pulling in more cooler air, condensing more water, releasing more energy, creating more heat,... You get the picture.

Once the storm is organized, which requires a few other attributes we won't get into here, as the cooler air rushes in, it is subject to the mysterious “Coriolis Effect”. This Coriolis Effect is simply the result of different points on the surface of the earth rotating at different linear speeds. Higher latitude points like CT at 42o North latitude, actually move slower than lower latitude points like the Caribbean at 14o North. CT creeps along at a pokey 339 m/s toward the east while the Caribbean zips along at 455 m/s. [This data compliments of Wolfram Project, see below.] This difference in surface speeds causes the rushing cooler air to feel a centripetal force that causes it to start moving in a circular path. Voila La! You just made a hurricane.

So in summary, the Hurricane Research Division of NOAA states the power of a typical Cat2 hurricane is over 200 times the entire electrical output of the planet earth. The majority of that power is generating from the thermodynamic effects of condensation while a smaller, yet just as impressive, portion is created by the shear kinetic energy of the winds. Indeed, a powerful creature. Try to wrap your brain around these numbers as you move your patio furniture inside before Sandy’s arrival.

Posted by HalfAstro Dr. Daryl Taylor at 5:22 AM