Excerpts From a Creationist "Science" Textbook

Put on your big boy panties, Kids! This is going to get ugly.

The Bob Jones Evangelical Christian University Press released a new "science" textbook in 1990. It has been updated a few times and is currently used in over 100 Christian schools across the world. I got most of this data from a website called 11Points. Any science teachers and/or science oriented human beings who read the following should have on a good pair of Depends(TM). I needed to change my pants after seeing this... 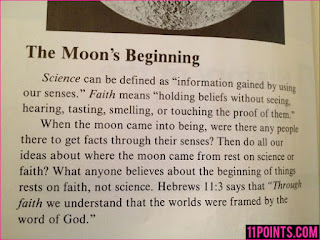 Allow me to shed some proverbial light here; nothing, repeat, NOTHING this page says about science is correct. I agree, we weren't there. Maybe Al Gore was there right before he invented the InterWebs, but other hume beans? No. So, according to Bob Jones, one must witness an event with one's own senses in order to be science. What utter garbage.

Point #2:The Age of the Moon. Alrighty then.

We know our moon is approximately 4.527 billion years; even Wiki agrees with this number (Earth is 4.54 Billion). This is mostly based on the few tons of moon rocks brought back by the six Apollo missions and three Russian Luna missions (automated) that actually landed there and came back. So, yeah, we know. 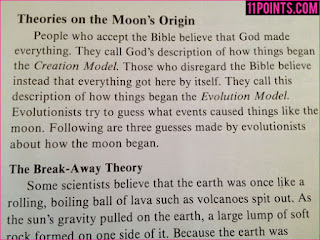 Point #Last (I just don't have the strength to go on...): The Mystery of Electricity?. This is the worst affront to science I've seen since the Moon Landing Hoax gang. Read 1st:

WHAT? Electricity that was somewhat understood in the 19th Century and is somewhat TOTALLY understood today. I wonder what they say about nuclear power?

Like I said earlier, I got this info from 11Points.com . They have a few other points of contention, 11 actually, so go check them out.

Posted by HalfAstro Dr. Daryl Taylor at 8:28 AM