Passing on an Oldie About NCLB...

Found this somewhere long ago and just found it again while looking for old info on NCLB. Cute.

Reacting to Federal Guidelines, the state of Connecticut, which has been highlighted as a role model for student testing by the two U.S. Senators from this State, released the following memo:

In response to the Federal No Child Left Behind Act, students will have to pass a new grade-level exam to be promoted to the next grade level. In the hopes that it will be uniformly adopted by all the states, thus illuminating Connecticut to a glorious front runner position in education, it will be called: the Federal Arithmetic and Reading Test (FART).

All students who cannot pass a FART in the second grade will be retested in each of the grades 3-5 until such a time as they are capable of achieving a FART score of 80% proficiency. If a student does not succesfully FART by grade 5, that student shall be placed in a separate mentor program, the Special Mentoring Elective for Learning Language (SMELL).

If, with this increased SMELL program, the student cannot pass the required FART, he or she can graduate to middle school only by taking a one-semester course in Comprehensive Reading and Arithmetic Preparation (CRAP).

If, by age fourteen, the student cannot FART, SMELL or CRAP, he or she will earn a placement to an intensive one-week seminar. This is the Preparatory Reading for Unprepared Nationally Exempted Students (PRUNES).

It is the opinion of the Connecticut Dept. of Education that an intensvie week of PRUNES will enable any student to FART, SMELL and CRAP.

Posted by HalfAstro Dr. Daryl Taylor at 12:07 PM No comments:

Well, now. Good news for a change. The horribly structured and absolutely Draconian NCLB (No Child Left Behind, or as I like too call it, Never Create Legislation Backwards) Law, GW's educational legacy, has lost a few more teeth. According to New York Times today, two more states are receiving waivers exempting them from the guts of the Law. This brings the total number of states exempt from this fiasco too 26! Now, my math ain't that good, but isn't that more than half the country?

Quote from the article:

“The more waivers there are, the less there really is a law, right?” said Andy Porter, dean of the University of Pennsylvania’s Graduate School of Education.

While I applaud the waivers as a signal that the Administration is finally waking up to the Dr Seussian world depicted by NCLB, it is sort of looking at things like a band-aid is all you need after being trampled by a herd of rabid buffalo. Another quote:

“It is another example to me of how we’re not focused on the right things in the American education conversation today,” Mr. Starr [Joshua Starr, superintendent of the Montgomery County schools in Maryland] said. “I have a lot of respect for Arne Duncan,” he added, referring to the secretary of education, “but it’s just sort of moving around the chairs on the Titanic.”

Posted by HalfAstro Dr. Daryl Taylor at 6:49 AM No comments: 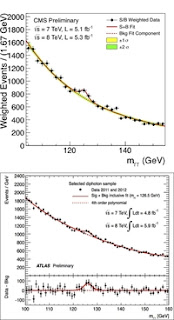 For those of you not too terribly familiar with the importance of this find, or for my AP Kids who fell asleep in May, allow me some Fizzix Pontification. There is a model (sorta full set of theories and such that works) that explains the way matter is built, how it behaves, what it's made of, and all that particle physics stuff. It's called the Standard Model of Matter (or SM of Particle Physics if you want to sound more imposing at a party...). It's basically a large set of relationships between all those subatomic particles that make up everything we see, touch, feel, or otherwise can detect and we call matter. You can think of it as a recipe for matter and the Universe. A great place to start learning about this stuff is Berkeley Labs The Particle Adventure. A laymen's outline? Sure. 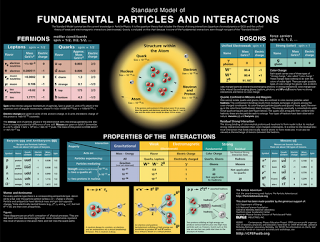