I'm not very savvy on the ins and outs of the political scene. I do my best to keep abreast of what's happening and whose causing it. However, there have been a couple silly (and IMHO downright illegal) political happenings the past week or so.

First, similar to some of the other anti-science education topics I've tried to cover here, Tennessee's so-called "Monkey Bill" stands to set back science education a good century or more. We've come a long way since the Butler Act of 1925, the law that actually prohibited the teaching of evolution in classrooms in Tennessee. Yikes. However, let's keep in mind that was 1925. Unclothed savages and dinosaurs roamed the Tennessee Valley way back then. Then the (in)famous Scopes "Monkey Trial" backed by the even more (in)famous ACLU challenged this Butler Act via a school teacher named John Scopes. In a long drawn-out battle between Jennings Bryan and Darrow, but the Butler Act was actively on the Tennessee books till 1967.

Well, it seems our ID.10.T friends from Tennessee are at it again; attacking science at its core. The Monkey Bill has become State Law. What I can't comprehend, beyond even the fact that elected officials can be some dumb when it comes to even what science is, let alone how to teach it, is the fact Governor Bill Haslam didn't even sign it! Yep, that's right! He decided NOT TO SIGN THE BILL and it passed into law anyway. According to the Commercial Appeal newspaper in Memphis TN:

In a short statement Tuesday afternoon, Haslam said that while he did not see that the bill would change the "scientific standards" taught in Tennessee schools, he also didn't see it accomplishing "anything that isn't already acceptable in our schools." He noted that while the bill passed with a three-to-one margin in the House and Senate, "good legislation should bring clarity and not confusion." "My concern is that this bill has not met this objective. For that reason, I will not sign the bill, but will allow it to become law without my signature." This is the first bill in Haslam's nearly 15 months in office that he has allowed to become law without his signature. Although the governor didn't say so, a veto would likely not have killed the bill. Under the Tennessee Constitution, the legislature can override a governor's veto by simple majority votes of the total membership of each chamber -- 17 votes in the 33-member Senate and 50 votes in the 99-member House. The bill won House approval on a 70-23 vote last year, then Senate approval 25-8 last month.

Oh, My Proverbial God! That means I can now safely teach my religion in my Fizzix class! I personally subscribe and practice the Flying Spaghetti Monster as my creator. 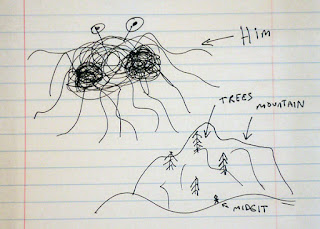 (a) The general assembly finds that: (1) An important purpose of science education is to inform students about scientific evidence and to help students develop critical thinking skills necessary to becoming intelligent, productive, and scientifically informed citizens; (2) The teaching of some scientific subjects, including, but not limited to, biological evolution, the chemical origins of life, global warming, and human cloning, can cause controversy; and (3) Some teachers may be unsure of the expectations concerning how they should present information on such subjects. (b) The state board of education, public elementary and secondary school governing authorities, directors of schools, school system administrators, and public elementary and secondary school principals and administrators shall endeavor to create an environment within public elementary and secondary schools that encourages students to explore scientific questions, learn about scientific evidence, develop critical thinking skills, and respond appropriately and respectfully to differences of opinion about controversial issues. [Emphasis mine...]

See next post for a crime committed by my own CT Legislature just yesterday...