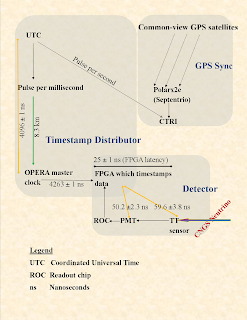 From today's Science News Online, a few top-notch physicists, in two independent studies, have raised doubt (if not actually yelling "NO, YOU'RE WRONG"!!) about the CERN OPERA results that reported faster than light speed neutrinos. In the December 06 issues of Physical Review Letters, Xiaojun Bi, a particle astrophysicist at the Chinese Academy of Sciences’ Institute of High Energy Physics in Beijing, cries foul. Not only would superluminal particles slap Einstein in the face, they would also break the sacred Laws of Conservation of Energy and Momentum. Direct link to APS article. Membership required. Direct link to Cornell Archives PDF - FREE.

See, the CERN neutrinos had parents. Like most of us, these were unstable parents. However, unlike my dysfunctional Mother, the neutrinos from CERN were born from unstable pions. Turns out, these pions had an energy of about 3.5 times that of the resulting daughter neutrinos they decayed into. The energy and momentum laws dictate the resulting particles had to have subluminal (slower than light) speeds. This was reported by physicist Ramanath Cowsik of Washington University in St. Louis and colleagues in the Dec. 16 Physical Review Letters. Direct link to Cornell Archive PDF - FREE.

So, what does this all mean? "Achieving the mind-boggling velocities measured by OPERA would have required pions with energies 20 times greater than their offspring, Cowsik’s team calculates. At such energies, though, the lifetimes of pions would be six times longer, which has been ruled out by measurements from OPERA and other experiments."

For Cowsik and other researchers, these problems and contradictions suggest that the laws of physics as currently understood are correct. But physicists will still be watching other neutrino experiments that can check OPERA’s result, which may be clouded by some unknown source of error. “No one is saying that the OPERA result is impossible, even though it would require extreme revisions to what we know about physics,” says Sheldon Glashow, a Nobel Prize-winning theoretical physicist at Boston University. “But if it turns out to be true, I would say to Nature, ‘You win.’ Then I’d give up, and I’d retire.”

Posted by HalfAstro Dr. Daryl Taylor at 2:28 PM No comments: 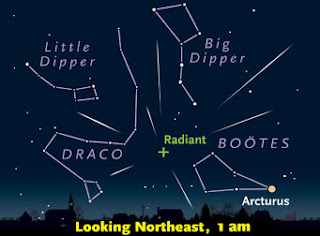 Bundle up warmly and head on outside between 1AM and 5AM Wednesday January 04 2012! The annual Quadratid Meteor shower promises to be a great show this year. This shower, although much briefer than some of its more famous cousins like the Leonids and Perceids, this one is bold and loud. Predictions range from 60 to 200 meteor streaks per hour during peak. Even the average of 120/hr yields a breathtraking 2 streaks per minute! WOWZERS!

Here are a few factoids and tips for watching:
1. BUNDLE UP! According to AccuWeather.com, Tuesday night/Wednesday morning is going to be bone-chillingly cold! Low temps are to be around 13oF. However, Weather.org claims it'll be serious Three Dog Night at only 9oF! Yes, that's cold enough to freeze your coffee and your little toes. So, be prepared! Lots of proverbial layers and a few "heat packs" wouldn't hurt.
2. The peak hour is expected to be 2-3AM. However, the waxing gibbous moon (what the heck is it waxing?) won't set till right around 3AM. The Moon's light will inhibit some viewing in areas where optimal conditions (See #3) don't exist.
3. Optimal Viewing? Find a spot away from bright lights. The darker the area, the better. Make it a family adventure. Pack a warm drink and several dozen good buffalo wings and head out to a park or secluded area.
4. The shower’s radiant (its apparent perspective point of origin) is in the not-well-known constellation Quadrans Muralis about halfway from the end of the Big Dipper handle to the head of Draco, as shown above. Quadrans Muralis is not one of the "modern" 88 constellations recognized by the IUA; it's an older However, if you aren't in my Astrology class, who'd know where the heck Draco is? So, I look for both Dippers; Big and Little. Make an imaginary line between them and then complete an imaginary equilateral triangle downwards so the third vertx is UNDER the Dippers. That 3rd vertex is the radiant. It’s fairly high up in the northeast after about 1 AM local time and keeps rising higher until dawn. The higher a shower’s radiant, the more meteors appear all over the sky. Watch whatever part of your sky is darkest, probably straight up.
5. The Quads are the result of an asteroid, not specifically from a comet like most other showers; Asteroid 2003 EH1.

So, bundle up and lead out to a dark place and have some fun with this! Next major metweor shower isn't till April's Lyrids.

Posted by HalfAstro Dr. Daryl Taylor at 6:49 AM No comments: 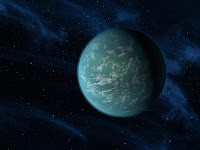 This news from NASA' Kepler Planet-finding Mission: Kepler Mission has confirmed the existence of an "earth-like" planet in our Galactic Backyard. This is just one of many possible planets they have found within the "habitable zone," or "Goldilocks Zone", the region around a star where liquid water could easily exist on a rocky planet's surface. Kepler has discovered more than 1,000 new planet candidates, nearly doubling the previously known count. Ten of these candidates are "near-Earth-size" and orbit in the habitable zone of their host star. Candidates require follow-up observations to verify they are actual planets and not just balls of gas or dwarfs.

According to Science News 12/05/2011 ; "The newly confirmed planet, Kepler-22b, is the smallest yet found to orbit in the middle of the habitable zone of a star similar to our sun. The planet is about 2.4 times the radius of Earth. Scientists don't yet know if Kepler-22b has a predominantly rocky, gaseous or liquid composition, but its discovery is a step closer to finding Earth-like planets. Kepler-22b is located 600 light-years away. While the planet is larger than Earth, its orbit of 290 days around a sun-like star resembles that of our world. The planet's host star belongs to the same class as our sun, called G-type, although it is slightly smaller and cooler."

So, it seems less and less likely every day that we are alone in this hugely huge vastly vast Universe...

Posted by HalfAstro Dr. Daryl Taylor at 2:45 PM No comments: