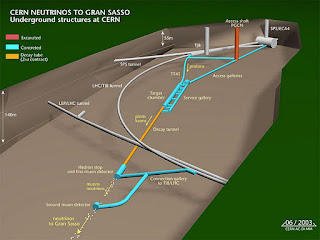 Well, lots of science news to catch you up on; Neutrinos faster than light, Michelle Bachman abuses science yet again, and sadly, the Tevatron shuts down. Lets do the Neutrino thing here and tackle those others later.

You've probably heard that the good physicists at CERN, the European Organization for Nuclear Research, arguably the biggest and baddest lab on the planet, reported last month that they measured a batch of neutrinos (weird little buggers) moving faster than light. Well, this would certainly put a damper on our understanding of the Universe, because a basic tenant of modern physics and cosmology is that nothing can go faster than light. Not neutrinos. Not Jeff Gordon. Not the USS Enterprise. Nothing.

Hopefully, cooler heads will prevail after realizing that the entire mess was a bad media interpretation of a CERN press release stating "Speed of Light Exceeded by Neutrinos"! Seems the "Neutrinos" were the winning relay race team at CERN's annual picnic. Speed of Light came in 3rd...

Seriously, lets hold our collective hats on this. Even the authors of the paper claim the results are crazy and they are not claiming that the speed of light has been broken. They are simply asking for help from the scientific community in finding an error or omission in their results that would explain this wacky thing.

Basically, they shot neutrinos in a straight line through the earth to another lab. The experiment is called OPERA (Oscillation Project with Emulsion-tRacking Apparatus), and lies 1,400 meters underground in the Gran Sasso National Laboratory in Italy. Neutrinos are weird little sub-atomic particles that virtually never interact with matter since they are electrically neutral and have an incredibly idiodically small mass if any, so they basically "don't see" all that rock and stuff in the way; just go zipping through unimpeded. Some of them got to their target in France 730 km away 60 nano-seconds faster than light would have. Seems crazy. Probably is. My money is on someone somewhere finding an error or two in the data or assumptions made. Some of the basic measurements, like the exact distance to the target, were based on other folks' data. If they were wrong, then this result is wrong.

It's also not the 1st time this type of thing has made the news. Seems that every few years, someone "finds" something that they say might indicate Einstein was wrong. Only to be shot down upon scrutiny of peers. In 2007, the Main Injector Neutrino Oscillation Search (MINOS) experiment in Minnesota saw neutrinos from the particle-physics facility Fermilab in Illinois arriving slightly ahead of schedule. At the time, the MINOS team downplayed the result, in part because there was too much uncertainty in the detector's exact position to be sure of its significance, says Jenny Thomas, a spokeswoman for the experiment. Also, astrophysics argues with the CERN results. If this is correct, then the most studied supernova in history, 1987A, would have shown neutrinos streaming in from the supernova, some 168,000 light years away, years before the light got here. However, the light got here and then the neutrinos got here a few hrs later... 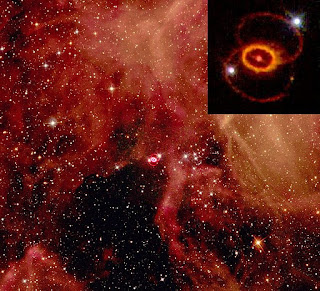