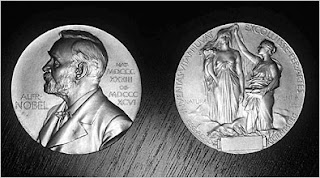 From a NY Times article this morning (and a very early morning radio report...), three US Fizzicists won the Nobel for their work on the expansion of the Universe! Quite cool stuff!

These guys (U.S.-Australian Brian Schmidt and U.S. scientists Adam Riess & Saul Perlmutter), who also won the prestigious Shaw Prize in Astronomy in 2006, won for their work in the early '90's studying distant supernovae. Now, Hubble, back in 1929, discovered the Universe was indeed expanding. However, till these guys came along, that expansion was believed to be slowing down due to gravitational attraction over time. They studied a specific kind of supernova, essentially an exploding large star, Type IA. This discovery lead to the conclusion that gravity was losing the battle and some other mysterious force was causing the Universe to grow faster and faster as time went by. This mysterious force was dubbed Dark Energy; not to be confused with Dark Matter.

Posted by HalfAstro Dr. Daryl Taylor at 6:59 AM