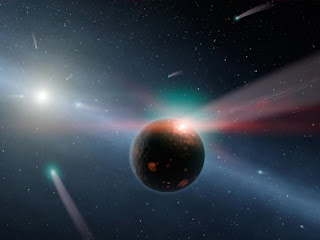 Oct. 19, 2011: NASA's Spitzer Space Telescope has detected signs of icy bodies raining down in an alien solar system. The downpour resembles our own solar system several billion years ago during a period known as the "Late Heavy Bombardment," which may have brought water and other life-forming ingredients to Earth.

So, what does this mean? It adds another feather to the proverbial hat of the current theory of where the earth got so much water; comet bombardment in its early life. Johns Hopkins University Applied Physics Laboratory in Laurel, Md, found a star system (meaning it has planets!) that is experiencing a huge bombardment of icy comets just like we think the earth did some 4 Billion yrs ago. So, we are seeing it in action around Eta Corvi which lies in our galactic back yard at only 59 light years! Cool stuff!

Posted by HalfAstro Dr. Daryl Taylor at 6:25 AM