Yet Another Cellphone Study Says "NO"!

When Will People Get It? Cellphone use DOES NOT cause any physical harm to humans or any other known carboniferous life form! In yet another of a Bajillion real scientific studies, the Swiss Tropical and Public Health Institute, University of Basel reports, "We did not find that young mobile phone users have an increased risk for brain tumors when regularly using mobile phones..." and "We did not see that the risk increased after five years or more since the first use of mobile phones."
The study is published in the Journal of the National Cancer Institute. 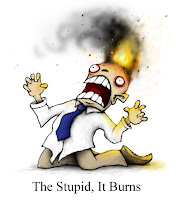 There have been no, let me repeat that for the slow readers, NO scientific link found between cellphone use and cancer. None. Nota. Zilch. Goose Egg. Empty Set. There's a huge difference between 12 idiots on a jury awarding BIG $$$ to a grieving widow of a guy who dies from brain cancer who just happened to also use a cellphone and having a real scientific conclusion. A jury decision is usually not indicative of scientific thought; as seen recently in the Casey Anthony trial. Sheeze! Remember what the forman of the OJ trial said after they let him go? "I never heard of this DNA stuff before and I'm not sure I believe in it." BELIEVE in DNA?

Meanwhile, back on planet earth...
Posted by HalfAstro Dr. Daryl Taylor at 6:10 AM