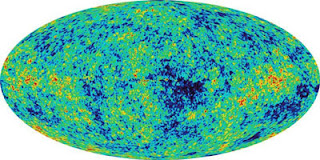 According to PhysicsWorld.com, cosmologists from US and China have dispelled the Hubble Bubble alternative to Dark Energy.

This "Hubble Bubble" was proposed to explain away the strange teeth-grinding hair-pulling Tums-popping world of Dark Energy, DE. DE is the mysterious force that is causing the Universe to expand at an accelerated rate, beating up on the better understood gravity. The Bubble was a supposed large "area" around the earth that was proposed to be expanding at a constant rate, but slightly slower than the rest of the Universe was expanding. This would give the appearance that the far away parts of the U were moving away faster thus the illusion of an accelerating expansion overall.

So, RIP Hubble Bubble.
Posted by HalfAstro Dr. Daryl Taylor at 4:08 AM