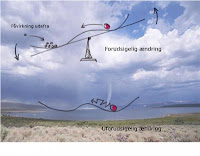 Just to back up two recent posts so you don't think I'm that whacky, this study from Niels Bohr Institute at the University of Copenhagen shows climate change is due to a series of chaotic parameters and as such is almost impossible to predict. It was published in Geophysical Research Letters in October 2010.
Two interesting statements from the study:

"For millions of years the Earth's climate has alternated between about 100,000 years of ice age and approximately 10-15,000 years of a warm climate like we have today." Hmm. So, do you think that the stuff that happened 100,000 years ago has anything to do with what is happening today? If you don't, you are ignoring a Bajillion years of paleoclimatology. Most folks just don't get it that the earth is "old" and it has done this heating and cooling thing way before we were even little splotches of gooey slime on a beach front somewhere. There are astronomical factors (Milankovitch Cycles and Hale (Sun) Cycles to name two big ones), localized earth based cycles (El Nino/Nina/Nota Oscillations, Pacific decadal oscillation, Arctic Oscillation, and both the North Atlantic & North Pacific Oscillations) and plenty of positive/negative feedbacks that the climatologists themselves argue about which comes first.

The researchers, via he image above, explained the two scenarios they investigated. One was the "tipping point" scenario where some external factor (Yes, like increased CO2) would cause the climate to seesaw back and forth and finally tip over into a different climate. The other scenario - the climate is like a ball in a trench, which represents one climate state. The ball will be continuously pushed by chaos-dynamical fluctuations such as storms, heat waves, heavy rainfall and the melting of ice sheets, which affect ocean currents and so on. The turmoil in the climate system may finally push the ball over into the other trench, which represents a different climate state. What was their conclusion?

"Peter Ditlevsen's (a climate researcher at the Niels Bohr Institute) research shows that you can actually distinguish between the two scenarios and it was the chaos-dynamical fluctuations that were the triggering cause of the dramatic climate changes during the ice age. This means that they are very difficult to predict."