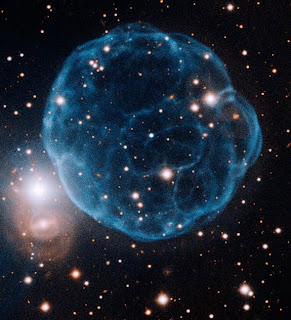 I saw this image of a newly discovered nebula a week or so ago. What I didn't know was that it was discovered back in January by an AMATEUR, not a PRO! That is SO KEWL!

According to Space.com and Sky & Telescope Mag, this "Soccer Ball" nebula "Kronberger 61, 'Kn 61' for short, is named after its discoverer, Austrian amateur astronomer Matthias Kronberger, who found the object after poring over data provided by the Digital Sky Survey. Kronberger and other amateur skywatchers were encouraged by professional astronomers to look specifically in the star field covered by Kepler [NASA's planet-seeking satellite]." It was found near Cygnus, The Swan, if that's interesting to you.